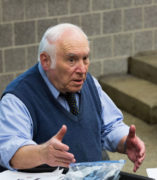 Dean Eitel has spent 40 years in either part-time of full-time teaching public administration students in the U.S. and abroad.  He received his Ph.D. in Public Policy from the University of Illinois at Chicago, Master of Public Administration (with honors) from Roosevelt University and B.S. from St. Louis University. He has taught at UIC for 7 years in both graduate and undergraduate courses and is well know for taking his students on numerous field trips too key organizations to help them gain a first-hand perspective of various public and non-profit issues.  Before this, he taught in DePaul University’s School of Public Service as Adjunct Professor for 6 years and then full-time for 12 years as the School’s Assistant Director and the Chair of the first Master of Public Administration degree,  When he retired from DePaul in 2010, the Greater Chicago Chapter of the American Society for Public Administration (ASPA) renamed its annual “outstanding student awards” in his honor which is now known as the “Dean F. Eitel Outstanding Student of the Year Award”.  It is awarded annually to a student from each of the 8 universities in the Greater Chicago area.  Prior to that, he spend 30 years in the federal government and retired in 1998 as Senior Director, Great Lakes Regional Office, U.S. Army Corps of Engineers.  He also worked in the private sector for a number of years.  Dr. Eitel was appointed by the Illinois Governor in 1999 to the “Illinois Strategic Planning Advisory Council” to help implement strategic planning in state agencies and served 3 years as its Associate Chair.  In 2012 he was appointed to the Illinois Governor’s “Government Services  Results” Team to help implement the Governor’s Budgeting for Results Initiative.  Prior to this, in 1980 the UIC Vice-President for Academic Affairs appointed Dr. Eitel to the “Advisory Council for the Master of Administrative Science/Public Agency Administration Program” where he and several others developed the first UIC MPA degree.  He taught abroad in Ireland (for 10 summers), Germany, and Italy and has taught senior Chinese leaders.  His research focuses on several areas including improving college course outcomes, enhancing leadership in the sector, building and sustaining effective teams to improve organizational management, and strategic planning to meet local government missions. He is active in several professional organizations and now assists county residents in career planning and is a consultant to a large suburban city council assisting in their performance management process.  He is published in 10 professional journals and has assisted international organizations in public management. He is now listed in the "Lifetime of Achievement in Government / Public Service" in the 2020 Edition of The Maquis Who's Who Edition 7.